Welcome to Vox Theory Media, an umbrella under which various indie eBooks, audio, games and additional content will be released.

My name is Julio Angel Ortiz, and Vox Theory has been a long time in the making.  It isn’t a project with terribly lofty ambitions, aside from wanting to wow, entertain, and maybe move you on a occasion. Put simply, it is a digital media extension of various projects I have worked on over the years, together under one brand.

Ever since I was a kid, I wanted to be a writer. And as I got older and began to realize that dream, I found myself empowered by the technology I embraced in my day job to channel my creative energies. This started with releasing “indie” eBooks (side projects I published myself after having gotten published the old fashioned way), but slowly morphed into audio and gaming.

When I finally decided what I wanted to do for a “real” career (as my parents smartly admonished me to do to support that “writing hobby”), it had to do with computers. Except I wanted to be a video game programmer, a creative ambition that never went anywhere (because I wound up working in the more practical Information Technology industry). But the desire to use technology to create things never went away, and I dabbled with the idea of creating my own game. While exploring a variety of tools in which to create the game I was prototyping, I looked at the wonderful Twine among others, but didn’t feel satisfied with their limitations. So, I decided to teach myself JavaScript, and used my game project as the impetus.

I also began dabbling in using web apps (Soundation at first, and then Soundtrap) to create music from loops and music synth tools, and that became a wonderful creative outlet.

But what to do with all of it? All of these disparate projects that only had me in common?

Here’s what I have in store for the site from VTM:

My indie eBooks series has been Infinity, Ltd., a series of short stories involving a retired Grim Reaper named Palequus and his (sort of retired, mostly kicked out) cherub named Peter, members of the eponymous paratemporal agency. What started as stories released on Smashwords subsequently migrated to Amazon but is now available on both platforms, plus to various other ones (such as Barnes and Noble) that Smashwords distributes to.

Three stories are available now: Unnatural Time, 1963!, and The Horrorist. We will also be publishing a series of 4 new short (short) stories on this site in late Spring / early Summer, with more planned for later.

Also available is a novelette, The Fear, on Amazon. I will producing a new,  expanded version of this story, planned for later in 2018.

That’s not all on the prose front. We will be publishing an ongoing monthly serial, called Obscura Rhapsody.  An action / fantasy / psychological drama, we delve into the lives of adventurers in the aftermath of a great loss, as well as the dangerous political waters they must navigate. Available in single-issue PDF format at first, with collections in various formats planned for later. 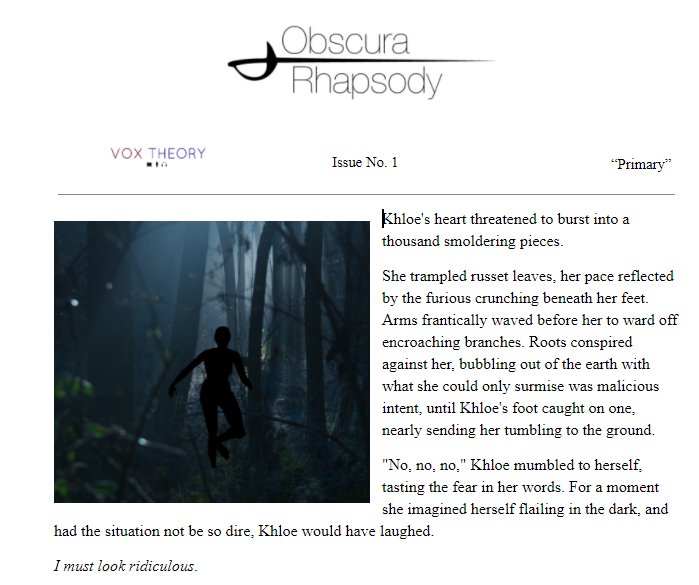 Chronic Rift founder, writer and podcaster John S. Drew will be joining me for our a rewatch of the science fiction series Fringe! We’ll be releasing our rewatch weekly beginning in June.

My music side project is called Emotionless ATMs, and currently we have 4 tracks available on Soundcloud. Work is ongoing on more material, and will have more to share in the near future.

We are currently looking into dipping our toes into the Podcast arena, but have nothing to share at this time.

A text adventure whose format was inspired by Destiny|RPG, our first game is called Godsblade, a loot text game in the vein of Monster Hunter, Phantasy Star Portable, and yes, Destiny. With over 150 monsters, combined 300+ pieces of weapons, armor, relics and special attacks called Aeons, as well as 100+ quests and extensive in-game Lore, Godsblade has been a passion project and a ton of fun to work on.  Developed in HTML5+Javascript+CSS (built on the JQuery framework), the game can be played easily on desktop or mobile web browsers. The game is currently in closed beta but will open up in late May.

And that’s all the news for now. In the coming days and weeks we will share more details on projects.